The War Against Tommy Robinson 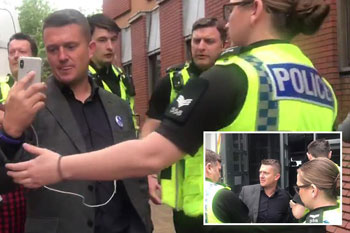 As children, we are told that the law is objective, fair and moral. As we grow up, though, it becomes increasingly impossible to avoid the feeling that the actual law has little to do with the Platonic stories we were told as children. We begin to suspect that the law may in fact—or at least at times—be a coercive mechanism designed to protect the powerful, appease the aggressive, and bully the vulnerable.

The arrest of Tommy Robinson is a hammer-blow to the fragile base of people’s respect for British law. The reality that he could be grabbed off the street and thrown into a dangerous jail—in a matter of hours—is deeply shocking.

Throughout the West there is a remorseless assault on free speech through the agency of human rights commissions, political correctness and racial discrimination laws.

It was a sad day for free sppech in Australia, when on 28th September 2011 Justice Bromberg in a long, rambling homily, found Andrew  Bolt and the Herald & Weekly Times guilty of conduct that contravened section 18C of the Racial Discrimination Act. In two columns, ...

What do these women have in common?