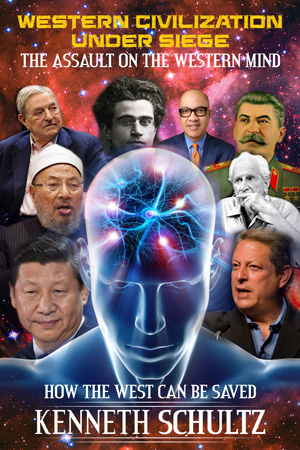 Under the sub-heading, The Assault on the Western Mind is a montage of faces representing what the author considers to be eight of the most critical players in reshaping and undermining the culture and philosophy of Western civilization. Who are they?

The book asks the question: is it too late to save the greatest civilization in history?

The following is from the back cover:

Schultz puts forward powerful arguments that some of these threats, if not taken seriously and dealt with accordingly, will ultimately usher in the end of the freedoms and lifestyles enjoyed by the citizens of many Western countries, and ultimately the end of Western civilization.

The book is unique in that it covers the multitude of threats facing the West, including:

“The fundamental question of our time is whether the West has the will to survive” – Donald J. Trump

You can download a free pdf copy of the book here