New book: The Decline and Imminent Fall of the West
Breaking News:

New book: The Decline and Imminent Fall of the West

In his important new book, The Decline and Imminent Fall of the West, Kenneth Schultz exposes the existential threats to Western nations, and indeed Western civilization. He starts by quoting Mark Steyn, "Much of what we loosely call the Western world will not survive the twenty-first century and much of it will effectively disappear within our lifetimes, including many if not most European countries". 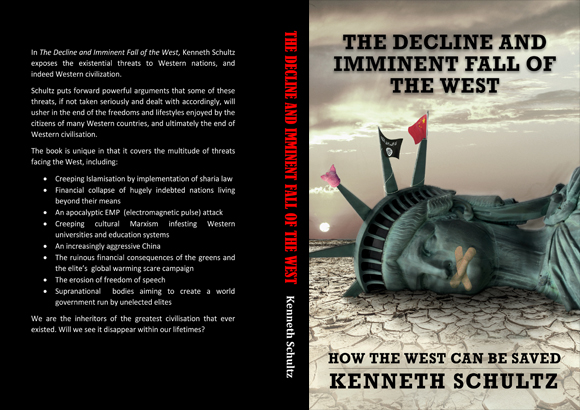 While Mr Steyn is concerned mainly with the Islamist threat, this book is unique in that it covers the multitude of threats facing the West and Western civilisation, including threats posed by:

In Kenneth Schultz’s opinion, and the opinions of many commentators, some of these threats, if not taken seriously and dealt with accordingly, will usher in the end of the freedoms and lifestyles enjoyed by the citizens of many Western countries, and ultimately the end of Western civilisation.

One threat in particular, largely overlooked by the media and the ruling classes is the threat posed by an electromagnetic pulse (EMP) attack. Such an attack, if it came to pass, would send the attacked country back to the pre-industrial age, with the consequent loss of millions of lives.

Schultz covers the history of Islam and sharia law in detail and reveals the Islamic 3-prong attack on the West:

But the book is not all doom and gloom. The final chapter sets out in detail the steps necessary to prevent, or at least mitigate, each of the threats identified in the book.

Well-researched with nearly 400 endnotes citing sources, this book must be taken seriously by Western authorities.

We are the inheritors of the greatest civilisation that ever existed. If you prize Western civilisation and want to hand on its legacy to your descendants, you should read The Decline and Imminent Fall of the West.

The book is available at Amazon in Kindle and paperback format.