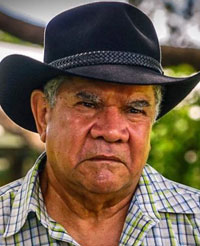 Simmering anger in indigenous Australia over a failure to make good for past wrongs could easily turn into organised armed resistance, Aboriginal academic Michael James “Mick” Dodson has warned.

In launching a new thriller by former journalist and political staffer Peter Cotton, Professor Dodson said the book’s central premise — Aboriginal activist gangs working to topple the state and seize back the land stolen from them — was “fiction but let’s not be negligent and one day it becomes reality”.

The novel, Dead Heat, is set in the near future and features Aboriginal communities in Jervis Bay on the NSW south coast and in central Australia, where Mad Max-style road conflicts take place between black and white characters.

Kidnappings and gruesome deaths are central to the plot.

Professor Dodson, a former Australian of the Year, was struck on reading the book by the thought “I know these characters, I’ve met them — the blackfellas and the whitefellas”, and felt it ­captured the “unsatisfied anger” of indigenous Australia over ­historical and ongoing dispossession, and the lack of an adequate place at the modern political table.

“Unsatisfied anger is something throughout history that’s caused conflict; generally speaking, anger as an emotion is in most instances justified (and) in Dead Heat I see such a plausible scenario,” he said.

“We’re trying to say, ‘Look, it’s time we addressed not just what happened 230 years ago but the impact of that over 230 years, which is still being felt today’. It makes people angry when it gets dismissed.”

One wonders whether Dodson’s Irish ancestors assisted in the “dispossession”.

Professor Dodson’s brother, West Australian Labor senator Patrick Dodson, is co-chair of the committee with Liberal MP and constitutional lawyer Julian Leeser, an early proponent of the “voice” in parliament.

Mick Dodson warned in his speech that without a “negotiated settlement” with indigenous Australia, “it really struck me if we’re not careful some of these scenarios (in Dead Heat) may come to pass … we need to deal with this unfinished business and the anger’s not going to go away until it is dealt with together”.

(Note the good old Irish names from his Irish ancestry).

A member of the Yawuru people, Dodson was the son of an Irish-Australian father and an Aboriginal mother.

In 1960, Dodson, and his six siblings were orphaned. Although an aunt and uncle of Dodson’s battled with authorities to prevent the children from being sent to live in a Catholic mission settlement, Dodson, his brother Mick——and two of their siblings were made wards of the state.

In 1961, two priests from the Missionaries of the Sacred Heart arranged scholarships for Mick and brother Patrick to finish their education at Monivae College, a Catholic boarding school in Hamilton, Victoria, at which they were the only Aboriginal students.

Not bad for a “blackfella”.

Why would he support armed struggle against a country that has been so good to him?