How to be a journalist in one easy lesson
Breaking News:

How to be a journalist in one easy lesson

You can save yourself three years of politically correct, left-wing indoctrination at journalism school by just following the simple steps below.

Learn the following vocabulary with its emphasis on hard-hitting negative verbs:
(All of the following are regularly used in media reports. See how many you can spot next time you read a newspaper or watch the TV news.)

Sparked (the most important word in a journalist's vocabulary), as in "sparked anger", "sparked uproar", "sparked outrage", "sparked a war of words";

rolled, as in "Caucus rolled the Prime Minister", or  "The Minister was rolled on  the  issue". Political leaders never change their minds or review their decisions, they "back flip" or they are "rolled";

The use of labels is a useful way to denigrate those who do not subscribe to your noble goals, while not appearing to be biased.

People who believe in old-fashioned democracy and national sovereignty are ‘populists’. If they object to political correctness they are ‘rednecks’. If they question special treatment for Aboriginals they are ‘racists’. To challenge immigration policy is to be ‘xenophobic’ and to raise concerns about Muslim enclaves is ‘Islamophobic’.

Conservatives on speaking tours are ‘alt-right’ or ‘far right’ and the violent thugs pushing an punching attendees are not ‘anti-fascists’ but actual anti-fascists, no need for pesky quote marks.

Look for stories of crisis, conflict, and catastrophe. If you can add climate change, racism or pedophilia, you could have a lead story. 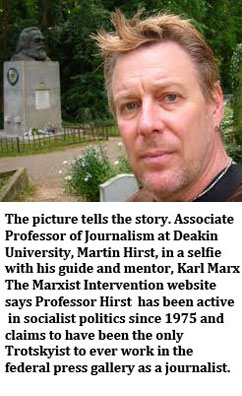 Try to adopt a left-leaning, politically correct attitude with a touch of world-weary cynicism.

Part of the duty statement of a good journalist is to bring social justice to the downtrodden and unde-privileged (provided they are non-white). Be ready to apply the "racist" tag to any white person or group that cannot see the benefits of this great mission. It is an incredibly powerful word. It will stop most non-believers in their tracks. However, the racist tag is to be used exclusively against white Anglos and is never to be applied to any other racial or ethnic group.

Also, part of your duty statement is the great mission to save the planet from global warming. Forget Clause 4 of your code of ethics, you are entitled to have a belief and commitment to this great cause. And stories of 100 metre seal level rises and millions of global warming refugees make great copy. If you can write enough stories supporting man-made global warming you may be invited to partake in the millions of taxpayer dollars in grants to attend conferences and report on the true believers.

As for scientists and others foolish enough to demand unbiased evidence of global warming, just apply the "denier" tag ( as in holocaust denier) to them. It is almost as powerful as the "racist" tag. Look to the ABC for a lead on global warming (or climate change as it has been renamed, following the planet's pesky refusal to warm for the past 18 years or so).

As senior lecturer in Communications and Media Studies at Monash University, David Holmes, says It is not that the BBC and ABC are afraid of mentioning climate change, it is that they are buying into the issue as if it were a bebate that required "balanced reporting".

Do not write stories that reflect unfavourably on Aboriginals, ethnics, Muslims, Asians, multiculturalism, feminism, homosexuals, unions or global warming believers. Forget your code of ethics. You are on a mission to correct injustices and save the planet. Balanced reporting is not necessary in these special cases. Learn the politically correct language of Aboriginal reporting. It is not correct to report that 3% of the population commit 50% of the violent crime in Australia. The correct line is "Aboriginals are over represented in jails". Get it? Be ready to fiercely attack any person misguided enough to denigrate Aboriginals, Muslims, Asians or warmists.

If you can master the above you are ready for a stellar career in journalism. You may even be invited to join Australia's elites and moral guardians at the ABC, SBS or Fairfax.