GetUp’s founders David Madden and Jeremey Heimans are heavily involved  in a number of similar  US and global left-wing activist groups, each of which is tied to the shadowy billionaire, George Soros (pictured). 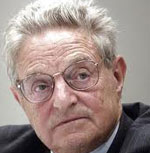 GetUp was inspired by, and modelled on similar US groups, such as MoveOn.org and Win Back Respect. Madden and Heniman were co-founders of Win Back Respect. According to public records published on CampaignDonations.com, when they were drawing expenses from the group in 2004, the major donor that year, with a contribution of $150,000 was George Soros.

Madden and Heimans are also involved with another Soros-financed left-wing activist group, MoveOn.org.  Public records reveal that between January 2003 and December 2004, Soros contributed $2,500,999 to MoveOn.org.

Madden and Heimans are  co-founders of the global activist group, Avaaz.org, an organization that the Canadian Minister John Baird in 2008 labelled as “shadowy foreign organization tied to billionaire activist George Soros.”

Madden and Heimans can hardly claim that GetUp is non-partisan when its original board members included Australian Workers Union secretary Bill Shorten, Australian Fabian Society secretary Evan Thornley, green activist Cate Faehrmann, and left-wing trade union researcher and “community organiser” Amanda Tattersall. The largest donor to GetUp in 2010 with a donation of $1.1 million is the CFMEU.

GetUp’s benefactor, George Soros is clearly partisan. Of the $3.5 million in recent  campaign donations made by Soros, 99.84% was donated to Democrat candidates and organisations.

The $3.5 million is just the amount declared as political donations. Soros has poured untold millions into numerous political, activist and media front groups. In 1973 in an attempt to defeat George Bush at the forthcoming election, Soros gathered a group of left-wing activists and Democrats at his mansion and helped found, with a donation of $10 million, America Coming Together (ACT), a grassroots activist group designed to co-ordinate all his other front groups.

When the US brought in laws limiting political donations, Soros used his considerable clout to  circumvent the laws by inspiring new legislation allowing the so-called “527” organisations to raise funds without breaching the laws. Hence the myriad of Soros activist groups can raise funds without limitation on the basis that they are not political groups. So while they may not donate to political parties they can run very effective advertising campaigns and stunts that clearly target one party and favour another.

It is clear that GetUp follows the Soros model in Australia. It is set up as a “non-partisan” activist group to harvest donations that are exempt from Australia’s political donations laws. The corporate entity, Getup Limited does not appear on the Australian Electoral Commission’s  list of “associated entities”, even though it claims on its website that is legally obliged to disclose donations over $11,200 to the AEC.

The group utilises the funds together with the energy of its well-meaning activist members to target the conservative parties with stunts and advertising campaigns whilst pushing left-wing agendas such as global warming scaremongering, the carbon tax, same- sex marriage and the release of illegal refugees from detention.