Tension had been building for months as gangs of Lebanese swarmed on to Sydney's Cronulla beach, jostling elderly patrons, abusing Australian families and threatening to "rape Aussie sluts" for wearing bikinis. They did not come to enjoy the beach in the Australian tradition. They came to flout their disrespect for Australian culture and for Australian law and order.

Matters came to a head the previous weekend when two young Australian lifesavers were bashed by a Lebanese gang.

Following a series of text messages, 5,000 Australians turned up on Sunday December 11, 2005 at Cronulla determined to "reclaim the beach".

Unfortunately, the combination of alcohol, hot sun and a group of neo-nazi infiltrators turned the demonstration into a raging mob. There were disturbing scenes of mob violence and attacks on police and ambulance officers. 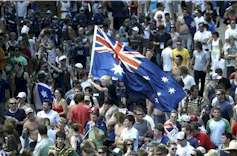 One man was stabbed in the back in a cowardly attack.

That evening around 100 locals of Punchbowl, New South Wales (a suburb 20 km to Cronulla’s north–west) gathered together at the local Punchbowl Park. Additional groups, armed with baseball bats, also gathered at The Promenade and Arncliffe Park.

The groups formed a convoy of “more than 40 cars” and drove down to the beaches “to get revenge” with many of the cars ending up in Maroubra.

At 22:45 the cowardly police command ordered police  “not to approach convoys of men of Middle Eastern appearance” however car details and registration details were to be recorded.

A local of Maroubra reported that each of the cars that arrived was “full, you know had four passengers.” The convoy was reportedly armed with bars and bats, knives, machetes and guns. The group assaulted several people, knocking one unconscious and threatening another with rape, and damaged between 60 and 100 cars, setting at least one on fire.

Police in riot gear moved to contain the violence and the crowds responded by throwing bricks and glass. Residents reported that in some streets “every car” had had their windows smashed, with glass covering the streets. Police also confiscated 40 iron bars and arrested 14 people.

A 26-year–old mechanic dubbed “Dan" was stabbed in the back three times and twice in the thigh with a 9.8 centimetre blade. The incident occurred outside Woolooware golf club when two cars carrying a group of males “described as being of Mediterranean or Middle Eastern appearance” approached the man and his friends. Dan and his friends attempted to flee from the group who were shouting “Get the Aussie dogs ... get the Aussie sluts”, Dan was knocked to the ground and was repeatedly kicked in the head. The attack ended when the 9.8 centimetre knife snapped off in the victim's back.He was taken to hospital in a serious condition as the blade had narrowly missed his spine and lungs.

Jake Schofield was attacked by a group of four men of “Middle Eastern appearance”, the men beat Schofield repeatedly, stabbing him twice and hitting him with a piece of concrete before stealing his wallet and keys. The attack left him with a fractured eye socket and fractured nose.

How did the print media portray it? All the emphasis was on the "racist" attacks by Australians. Very little

mention of the Lebanese thuggery.

I trawled through the websites of the mainstream media next day, including The Australian, The Sydney Morning Herald, The Daily Telegraph and the Herald Sun. There were dozens of pictures of the Cronulla riots but not one picture of any of the dozens of car and shopfronts trashed by the Lebanese gangs. There were no pictures of the Leb gang members, not even a picture of the man who was rushed off to hospital with a Leb knife protruding from his back.

The mainstream media, particularly the print media, are an absolute disgrace.

The Leb problem has been simmering for years, but the journos have applied a Maxwell Smart cone of silence. People like ex-NSW detective Tim Priest have been warning of the dangers of Lebanese criminal gangs for years.

The night after the riots the detestable Ellen Fanning interviewed Prime Minister John Howard on Nine's A Current Affair. In an incredibly biased piece of journalism Fanning desperately tried to get Howard to say that the Cronulla riots were racist and indicative of racism in Australia. Howard, to his credit was having none of it.

Even the electronic media refer to Cronulla as "race riots" and the Lebs violence as "ethnic violence".

If the media had done their job they would have exposed the looming problem with Lebanese lack of respect for law and order months or even years ago and perhaps avoided Sunday's confrontation.

It is no wonder that journalists are so despised.

Some time later, journalist Miranda Devine, gave a more balanced account of the incident, although she couldn't avoid the racist slur, when she wrote on December  22, 2005 While the NSW police lock down entire beachfront suburbs, instruct stores to stop selling baseball bats, and apply the full force of the law to pasty-faced nerds with a taste for Nazi literature, they continue to cower from the real hardmen, the Lebanese-Australian criminal gangs of Sydney's south-west who have ruled the roost in this city for at least a decade and now number in their thousands.

So when parents and children attending Christmas carols on Monday night, December 12, at St Joseph the Worker Primary School in South Auburn were abused and spat on by "young men of Middle Eastern appearance", there were no police to protect them. Not even when the sounds of gunshots echoed inside the church, and parked cars were pumped full of bullets. "Police were called by a number of parents and the principal, but they were unable to attend because they were needed elsewhere," said Cardinal George Pell in a statement.

The police were busy that night - Sydney's mini Kristallnacht "night of the broken glass" - as carloads of men drove east from Lakemba and Punchbowl to systematically attack whole streets of parked cars with bats and machetes. Identified by police as being of the proverbial Middle-Eastern appearance - code for Lebanese Muslim, despite the fact many are second-generation Australians - they also stabbed a man, smashed a woman's head with a bat, attacked another woman in a pizza shop and a man who was putting out his rubbish.

They were extracting revenge for the riot the day before on Cronulla beach when a protest against continuing intimidation of beachgoers by thugs described as Lebanese turned ugly and drunken racists attacked passers-by suspected of being "Lebs".

What was it like living in Cronulla leading up to and after the Cronulla riots?

A trip to the local park was certainly very interesting. Our local reserve was Shelly Park, where Cronulla’s accommodating and welcoming nature was always on display. Large Middle Eastern families picnicking — the delicious smell of Middle Eastern meats on the barbecue remains with me even now, long after I moved house. Groups of men sitting around their hookahs and shooting the breeze, their children and grandchildren romping on the swings, slides and jungle gym.

A girlfriend and I decided to take our sons to play in Shelly Park one weekend. Our boys, both 10-year-olds at the time, headed over to the play equipment, only to immediately return upset that they had been told by the Middle Eastern kids on the play equipment to “f**k off, this is our park”.

What did we do? We did what the locals had done for years. We accepted the bullying, packed up our kids and left.

Another day we wanted to swim in the ocean pool at Shelly Park, only to be greeted by a row of Middle Eastern men linked arm-in-arm across the full width of the pool and blocking all comers from entering the water. When we asked if we could get through so we could swim we were told, “No, our women are swimming”.

Why, out of all the many families of so many different ethnicities that flocked to Cronulla on weekends, was there only one group that showed no respect, no flexibility, which staked sole claim to what had been, up until then, available to all?