Cowardly world leaders march up safe side street instead of with Charlie Hebdo marchers
Breaking News:

Mass deception and cowardice of the political elites

The mainstream media breathlessly reported on the bravery and solidarity of world leaders marching with the million Charlie Hebdo marchers. 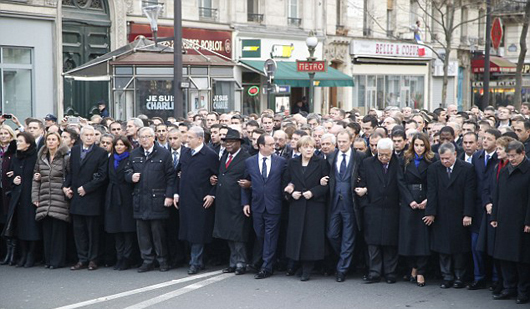 This is how Piers Morgan reported it for the notoriously left-wing Daily Mail Australia:

It was one of the most powerful images of solidarity the world has seen since the end of World War II.

A million and a half people marching through the streets of Paris, some crying, many cheering, others chanting ‘Je suis Charlie!’ or singing La Marseillaise – that most spine-tingling of all national anthems.

At the head of the march were 50 world leaders; the Prime Ministers of France, Britain, Spain, Denmark, Poland, Turkey and Israel stood side-by-side, arm-in-arm with the German chancellor, the Palestinian president, and the Queen of Jordan.

It was a fantastically moving spectacle as they all nudged forward, foot by foot, through the vast throng crowds.

Great story - except it wasn't true.

The wide-angle picture below reveals the truth.

The reality is the world leaders gathered in a deserted side-street for a photo-op. If you look at the video you will see the leaders looking left and right as if to acknowledge the crowds hanging out of windows. But look again at the top picture. There is not a soul to be seen hanging out of the windows in the deserted street. And it certainly wasn't the Place de la Republique where the real march took place.

The few rows behind the leaders were made up of dignitaries and security people.

Pure theatre for the benefit of a compliant news media.

If you don't believe me, then scan the various videos of the event. The leaders video has been cleverly spliced on to the marchers video, but you will never see the leaders actually leading the march.

You can read an analysis of the leaders video here.