Climate change update - are we heading for another ice age?
Breaking News:

Climate change update - are we heading for another ice age? 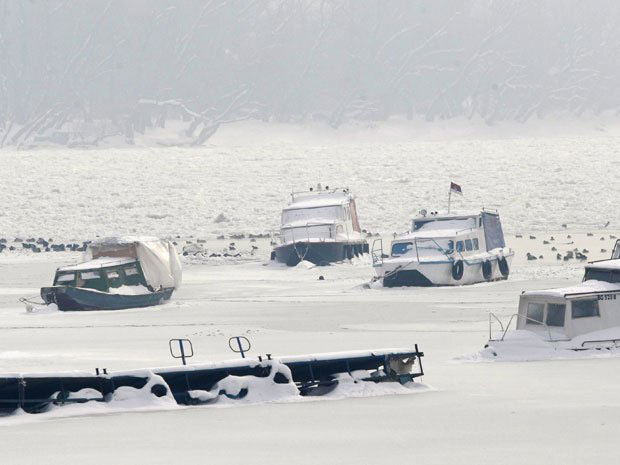 Previously this story would be called Global Warming Update, but as there has been no measurable warming of the planet for sixteen years, the global warming alarmists have re-named their dodgy theory "climate change".

Here are some recent articles of interest.

More than 220 people have died across Europe as a result of the recent cold snap, with Ukraine bearing the heaviest toll.

People have been found dead on the streets in some countries, while thousands have been trapped in mountain villages in Serbia. In Italy, Venice’s canals started freezing over and even Rome was dusted in snow.

THE Suns activity has plummeted to a century low, baffling scientists and possibly heralding a new mini-Ice Age.

"I've been a solar physicist for 30 years, and I've never seen anything quite like this," Richard Harrison, head of space physics at the Rutherford Appleton Laboratory in Oxfordshire, told the BBC in a 18 January 2014 report.. Read more

A new  theory of Climate Change

(If the Svensmark theory, below, is correct, then based on the story above regarding the low solar activity, the planet is heading for a very cold period, possibly even a mini-ice age)

In 1995, Henrik Svensmark discovered a startling connection between the cosmic ray flux from space and cloud cover. He found that when the sun is more active--more sunspots, a stronger magnetic field, larger auroras, stronger solar winds, etc.--fewer cosmic rays strike the earth and cloud cover is reduced, resulting in warmer temperatures.

He has discovered a complete chain of events that explains the variations in global temperature that have puzzled climatologists for so many years, and that has now led to an explanation for the recent global warming episode.

It starts with cosmic rays coming to earth from exploding supernovas and collisions of remnants of stars with nebula in space. Many of these cosmic rays are shielded from striking the earth by the electromagnetic activity of the sun.

When the sun is active, the solar wind prevents cosmic rays from entering the earth's atmosphere by sweeping them around the earth. When the sun is inactive, more of them penetrate the atmosphere. Upon reaching the lower atmosphere where more sulphur dioxide, water vapor, and ozone is present, the cosmic rays ionize the air, releasing electrons that aid in the formation of more CCN and form more dense clouds.

This increase in low-cloud amount reflects more solar energy to space, cooling the planet. Variations in electromagnetic activity of the sun and fluctuations in cosmic ray intensity from space result in the periodic warming and cooling of the earth.

(Editor's note: If the Svensmark theory is correct, then based on the story above regarding the low solar activity, the planet is heading for a very cold period, possibly even a mini-ice age)

Confessions of a ‘Greenpeace Dropout’ to the U.S. Senate on climate change

"There is no scientific proof that human emissions of carbon dioxide (CO2) are the dominant cause of the minor warming of the Earth’s atmosphere over the past 100 years. If there were such a proof it would be written down for all to see. No actual proof, as it is understood in science, exists." Read more...

Global warming: How the IPCC distorts the facts

IPCC computer models do not accord with observations

The graphic below reveals the IPCC global warming hypothesis to be overblown scaremongering. The graphic is taken from a draft of the IPCCs September 2013 report.The coloured portions of the chart show various IPCC computer projections. The actual observations (in black) show no noticeable increase in global temperatures for the past 15 years, notwithstanding millions of tonnes of extra CO2 being pumped into the atmosphere.

When the IPCC realised the graphic gave the game away, it was quietly substituted by a more obscure graphic in the final report.