Adam Goodes: Un-Australian of the year

Part-Aboriginal footballer, Adam Goodes has shamefully abused his position of  Australian of the Year, using his soapbox to vilify our past and preach division.

Commenting on a the film, Utopia,  by another un-Australian, John Pilger, the Swans captain denounced “our very dark past, a brutal history of dispossession, theft and slaughter”.

“Europeans, and the governments that have run our country, have raped, killed and stolen,” he wrote in Fairfax newspapers. 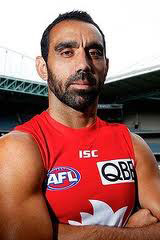 Goodes attacked Australians who resisted this lurid characterisation of our past: “The people who benefited most from those rapes, those killings and that theft ... turn away in disgust when someone seeks to expose it.”

This is amazing hypocrisy from a man who is as much European as he is Aboriginal. Goodes was born in South Australia, to Lisa May and Graham Goodes. Through his mother, Goodes is of Adnyamathanha and Narungga descent while he has English, Irish and Scottish ancestry through his father.

Goodes, identifies as a “proud Adnyamathanha man” — an Aboriginal from a Flinders Ranges tribe. No mention of whether he is also a  proud Scot or proud Englishman. And can he be sure none of his ancestors perpetrated the crimes he is accusing Australians of.

And when he attacks “the people who benefited most from those rapes, those killings and that theft”, does he include himself?

Goodes is rich and famous. He has freedom, the best health care and a life of luxury unimaginable to his distant ancestors on his mother's side.

Goodes became infamous when a 13-year-old white girl was subjected to national humiliation after she shouted “ape” at the bearded footballer from the sidelines of a tense game.

She was removed from the stands and made to wait two hours after she’d been interviewed by police while it was decided what to do with her.

She was then called the “face” of racism. The girl was named and film of her shown around the country, 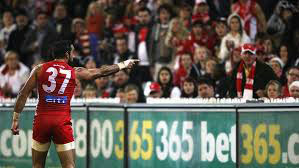 although she insisted she had not meant “ape” as a racial slur and was sorry.

One of the questions to be answered when nominating person for the award of Austraalian of the Year is: How does the person nominated make you proud to be Australian? And one of the selection criteria is: Availability and commitment to promote national pride and active citizenship though the year of the recipient's appointment.

A significant percentage of the population would feel that on these two points, Goodes is a dismal failure and has disgraced the award by vilifying white Australians. Creating racial disharmony and divisiveness is very un-Australian.

The bizarre selection of Goodes as Australian of the Year can be better understood by looking at the make-up of the members of the selection committee, the Board of the Australia Day Council.

Making a complaint to the Human Rights Commission

If you feel offended or vilified by Goodes' inflammatory comments you should make a complaint to the Human Rights Commission. It is as simple as filling out an online complaints form and sending it by email or post to the address given on the website.

You will need to provide specific details of your complaint.

This is what appeared in the Sydney Morning Herald on February 9, 2014. Goodes wrote:

Utopia has shown me how, over 225 years, the Europeans, and now the governments that run our country, have raped, killed and stolen from my people for their own benefit. The total injustices that have been played out since colonisation are absolutely shameful, and I now find it hard to say I am proud to be Australian.

Australia has a very black past; Utopia shows real-life stories of what has happened over the past 225 years.

Imagine watching a film that tells the truth about the terrible injustices committed over 225 years against your people, a film that reveals how Europeans, and the governments that have run our country, have raped, killed and stolen from your people for their own benefit.

Now imagine how it feels when the people who benefited most from those rapes, those killings and that theft – the people in whose name the oppression was done – turn away in disgust when someone seeks to expose it.

Goodes seems to be saying that current white Australians have benefited from past rapes, murders and theft, a statement that be seen as extremely offensive to many people.